Once roast beef has cooked, remove from slow cooker with tongs into a serving dish. Break apart lightly with two forks and then ladle about 1/4 - 1/2 cup of gravy over roast beef.

Store remaining gravy in an airtight container in the refrigerator for another use.

If you prefer a more pronounced flavor, once the roast beef has been removed, use a fat separator on the gravy and then pour the gravy into a saucepan over medium heat. Simmer until the gravy has reduced by half.

Posted by Marcia Van Camp at 7:49 AM No comments: 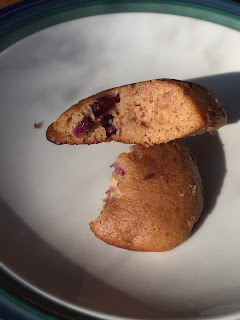 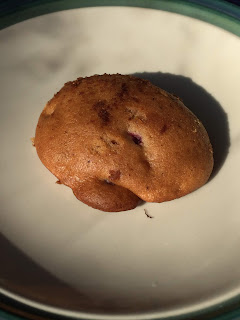 Directions
Boil Apple Cider down to ¾ cup
Open Pomegranate and remove seeds (Half will be added to the mixture after the apple cider is added, the other half can be added or eaten)
Mix all try ingredients in a large bowl and mix well
Add Butter and Egg Mix Well
When Apple Cider is Boiled down remove from heat and let cool for 5 minutes. It should still be warm to hot when added to the mixture.
Mix well
When smooth add pom seeds mix well
Put in fridge to cool 1 hour
Scoop on cookie sheet bake in oven 400 F for 12 to 14 minutes

Posted by Marcia Van Camp at 9:37 AM No comments:

Notes: We used this on a turkey and it was great!
Posted by Marcia Van Camp at 10:23 PM No comments:

Email ThisBlogThis!Share to TwitterShare to FacebookShare to Pinterest
Labels: Sauces and Marinades and Dips

The original recipe is for 4 patties, but we doubled it since they were so good! 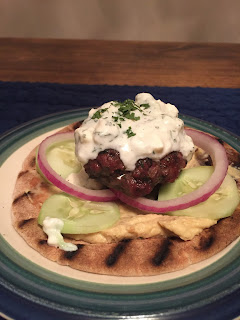 Burger - Directions
1. Turn on the grill to medium-high
2. Combine the below and form 8 patties.  Flattening them out will make it a little easier to eat with the pita
2 lbs ground lamb
6 tbl chopped parsley
4 tbl grated red onion
3 tsp ras el hanout
1 tsp salt
3. Grill 4 to 5 minutes on each side.  During the last minute, grill the pitas, flipping once.
4. Spread 2 tbl hummus on each pita, then layer with sliced cucumber, red onion, burger, yogurt sauce and parsley


Ras el hanout - Directions
Combine ingredients and mix.  You will have more than you need for this recipe which means you can make it again, or try it on something else.

Email ThisBlogThis!Share to TwitterShare to FacebookShare to Pinterest
Labels: Entrée 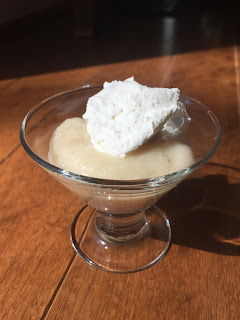 Directions
1. Add the water to a heavy pot, add the barley, and bring to a boil. Add the sliced apples and cook gently until both the barley and the apples are soft (normally about half an hour).

2, At this point the apples may have gone completely to pieces. This is just fine. Remove the mixture from heat and puree -- either in a blender, right in the pot with a stick mixer, or by pushing through a sieve. (I didn't use a sieve)

3. Return the mixture to the pot and stir in the sugar and lemon juice. Bring to a boil again. Boil for about five minutes: then remove from the heat and cool.

4. When cooled, put into another container and refrigerate until very cold. Serve cold with cream stirred in. Or (for a slightly fancier take on the presentation) whip heavy whipping cream with a teaspoon of sugar per cup of cream, and layer in parfait glasses with the cream, saving a dollop for on top.

Notes: When I first made it, I thought the lemon was way too strong, but the next day it was much more subtle. I love the pudding and cream but I do think there might be something that could bring the two flavors together even better..perhaps a smidge of raspberry syrup would do the trick.
Posted by Marcia Van Camp at 9:19 PM No comments:

Email ThisBlogThis!Share to TwitterShare to FacebookShare to Pinterest
Labels: Dessert

Directions
1. Grease a 9 x 13 cake pan and then sprinkle coconut and pecans on the bottom of the pan.

2. Make cake mix as directed and pour into pan and spread evenly.

4. Start water to boil in a double boiler.  When ready, put cream cheese and butter in the double boiler and melt.  Then add the powdered sugar and stir with a whisk.  Pour this over the cake mixture (like long pieces of ribbon).  The cake is going to bubble up through the cream cheese so you don't want to cover the cake completely.

Notes:
If you don't have a double boiler you can use a low heat setting and stir more often.  It will also help if the cream cheese and butter are softened ahead of time. My sister also served this to a family in Brussels and they absolutely loved it!


Posted by Marcia Van Camp at 4:36 PM No comments:

Notes: The original recipe has directions for cooking the salmon on high heat but we just usually generously sprinkle the seasoning on the fish and cook on the stove top. This seasoning mix is one we keep on hand at all times because it's our favorite for salmon. We usually just cook 2 fillets at a time, so we have some left over for the next time.
Posted by Marcia Van Camp at 9:40 PM No comments: